After previous “Wave Tide”, once again, we encounter another “wave tide”-Escaping by Crafty Scheme. This exhibition can be regarded as a practice of new realistic painting in China. Artist participants from Beijing, Chongqing and Yunnan are all graduated from different art academies. They are all with solid theoretical fundament and able to express their mind on their works with concise skill. Each of them self-consciously pursues their goal. In the same time, they unconsciously formed a sort of painting trend, and even a fundamental keynote of the painting in this age.

When we say this exhibition is a practice of new realistic painting, a question is raised: what is Neorealism (new realism)? Originally, it is a school of painting firstly proposed by artists of former Soviet Union. The word of “realistic” reminds us with those realistic paintings created by Gustave Courbet in middle of 19th century. He depicted real life with a stable realistic technique and filled up the vacancy of romanticism phantasy. But we have to agree that the realistic works are all limited of content, and depiction is too complicated and trivial. No matter how realistic the depiction is, it is merely a kind of representation of appearance of the nature. It can never content our desire of seeking essence of the nature. Neorealism comes from the combination of realism and modernism; it not only depicts appearance of the nature, but also touches on the essence of the nature.

As for the realistic works in this exhibition, on the one hand, they are all exploring and creative of content; on the other hand, they attempt to be breakthrough of the form. Artists express new real life with oil painting. At the same time, they also extract and exaggerate reality with abundant expressive force of oil painting, together with the color of western modern art. Their artworks are very distinctive with different personal styles, but also in common of national sensibility as Chinese artist. Therefore we can say that today’s new realistic paintings are no longer the old ones which is separated from real life, but some realistic works profoundly marked with the signs of this age and painter’s personal thought and sentiment.

We appreciate all artist participants for their perfect artworks involved in the exhibition; we are also thankful for great support from Mr. Lei Yongbin, the curator of Chongqing Jiangshan Gallery.

Escaping by Crafty Scheme by He Libin

The western realistic painting has quite a long history. Some prototypes of realistic color, realistic sculpt, realistic spaciousness and perspective principle could be found in the great Italian painter Giotto’s masterwork-the decoration fresco of Arena Chapel in Padua, completed around 1305. And then in 15th century, Van Eyck Brothers invented the oil painting technique and greatly developed the realistic and sculpt function of painting. The oil painting, as a realistic art form, reached its artistic peak in 16th century. Influenced by ancient Greek humanism and ancient Roman humanism, the artists started to bring their painting objects from religions rituals and services depiction to drawing accurately from earthly life, hence the realistic painting emerged. Throughout the historical evolvement of different artistic styles such as Mannerism in the later of 16th century, Baroque Art in 17th century, Neoclassicism in 18th century and Realism in 19th century, the realistic painting hadn’t changed its foundation of rigorous and scientific study of perspective until the emergence of other artistic trends, like Impressionism and Fauvism. Influenced by Color Theory and Psychology, the painting started to be beyond the shaping of figures. The color gradually exceeded the form and even acted as an independent element. These changes took place in the evolvement of Impressionism, Fauvism, Cubism, Futurism, Symbolism, Surrealism, Dadaism, Expressionism, Abstract Art, Minimalism, etc. Eventually, the realistic painting gradually faded out of our sight. It had not appeared in the art history until 1970s when Photographic Realism came forth. Influenced by numerous modernism art trends, realistic painting gradually divided into two branches: one was influenced by symbolism and expressionism and focused on the expressing of personal mind and emotion, emphasized on constructing an emotional scene on the image; another, influenced by photography, stood on the proposition of recording images by a fully objective, emotion-free mean and believed that the painting should be exact copy of the photo. Any trace of individuality, emotion and attitude was intentionally hidden. The purpose was just to create a plain and apathetic effect on the picture in a dispassionate way.

The western painting was introduced into China by some missionaries in the later of 15th century; however, it hadn’t been officially recognized and introduced until 20th century. During the May Fourth period, Xu Beihong, Liu Haisu, Xu Zhimo, and Li Yishi…etc. once fiercely argued about the introducing of western culture and western art, and finally the western realistic painting was accepted in China and programmed into Chinese aesthetic education system. And that was in line with the context of introducing and promoting western academy and invigorating Chinese nation with western science and technology. Since then, realistic painting has been inherited all the time in Chinese aesthetic academic teaching, and still remain a very complete system today. In the same time, the thought of modern western art and post-modern art have been widely spread in Chinese art institutes, colleges and artists. But for contemporary Chinese artists, how to respond and reflect so many art trends and aesthetic thoughts, how to integrate western painting conception with geographical culture background and their own aesthetic experience? Escaping by Crafty Scheme—Exhibition of new Chinese realistic painting attempts to present this process of following and breakout through some individual artists’ cases.

Yang Yijiang’s oil painting is following the principle of classic European realistic oil painting which is refined layer upon layer and heavily sculptured, and with a character of peaceful and noble. His painting works are tranquil, elegant and pure, without any flippancy. Yang Yijiang always creates oil painting with a quite long time. He establishes dialogue with the world through reiterative refining and sculpturing. His works always experiences an overlapping estrangement effect. In his Mirroring series, the figures and scenes reflecting by the mirror are dislocated from the ones outside of the mirror; there is no connection between the real objects and their reflection in the mirror. This will bring audiences a feeling of contradiction and confusion. In his Still Life series, he often put two irrelevant objects together in one space to produce contrast and dialogue, while he himself is a calm observer who is secretly watching this world. Zhang Yingnan’s painting also presents a ridiculous character. His works depict dreamily scenes with which you might feel familiar. And more realistically and finely he depicted the figures and scenes, stronger you would feel this kind of vivid strangeness. By this way a real dreamland is established. As for Wang Hongyun, his paintings are full of youth spirit. Either in his We are excluded from here series which describes his own living circumstance, or sketches of natural landscape, a temperament of sentimentality, emotionality and elegance is strongly expressed. He restrains the color to a neutral gray, which is neither too strong, nor too light. This sort of modest expression is somewhat characteristic of traditional Chinese painting.

In the face of western culture and Chinese culture, some artists can always chose a smart and natural approach in their artwork creation. Zhang Chunying applies western Tempera skill and color-tone to depict very eastern and very emotional scenes, such as ferry, lotus and floating tree…etc. which appearing many times. None of them is far away from eastern religion-like life inspiration. Wang Jiwei applies authentic realistic skill of western oil painting and Caravaggio’s Tenebrism to portray classic Beijing Opera figures. Different slight emotional expressions and gestures of these figures which demonstrate the charm of Beijing Opera, together with those corresponding landscape, compose a real but illusive reconstructed space-time, shifting between stage and reality. The objects in Chen Liu’s painting are inspired by josses in traditional Chinese temple. Perhaps what he focuses on is the temperament of these josses, which is in-betweens of urban people and gods. Chen Liu’s vivid portrait of these figures and scenes indicates again and again its sense of reality and absurdity. He attempts to interpret his understanding about today’s world through those “ancient stuffs”.

Other artists have more stronger and intuitionistic understanding about today’s world. Their paintings have character of both realism and expressionism. In western painting system, realism has widely different trend from expressionism. Their aesthetic orientations are also widely divergent: realism follows the principle of rigorous and scientific sculpts and study of perspective to construct a real, ordered and sensible world, while expressionism pursues sincerity and catharsis of emotion, emphasize on strong and intuitionist outpouring of temper and sentiment, which can only be achieved by strong color, strong drawing style and overthrow of classic sculpt principles. Chaim Soutine, a famous French painter, is the best representative of expressionism. All objects in Soutine’s painting are inclined or even upside-down. The world in his eyes is chaos and crazy. In Liu Jihua’s painting, conventional building and modern building are staggered and overlapping, like wild plants growing disorderedly, but they are all floating without roots… Liu Jiahua precisely and deeply depicts every detailed character and textures of these scenes to reflected the disorder and chaos of this world.

The artworks of above artists are miniatures of current situation of the western realistic painting in China. As an interpretation which bridges two different cultures, it is not important either to study its origin and inherit its spirit, or to interpret it from a distance. It is the same as filling new wine with old bottle or filling old wine with new bottle. They have same meaning in some extent as far as the painters can express their own emotion, thought, language, skill and culture… the rest factors are nothing but tools. 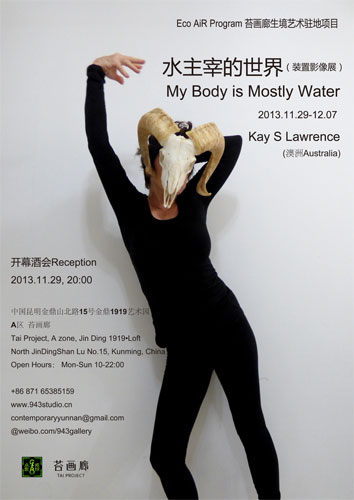 My Body is Mostly Water by Kay S Lawrence 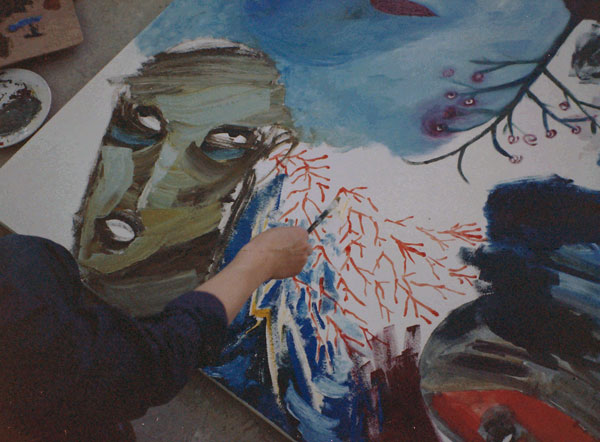