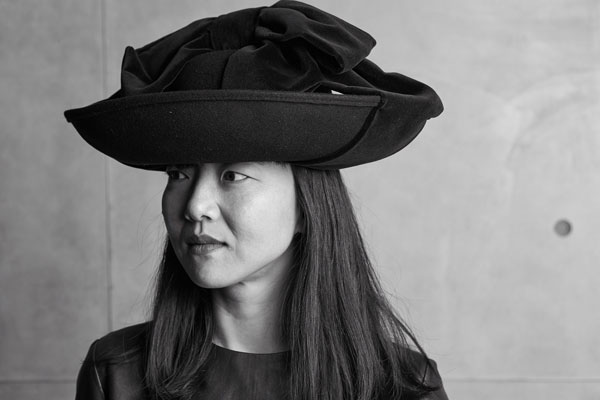 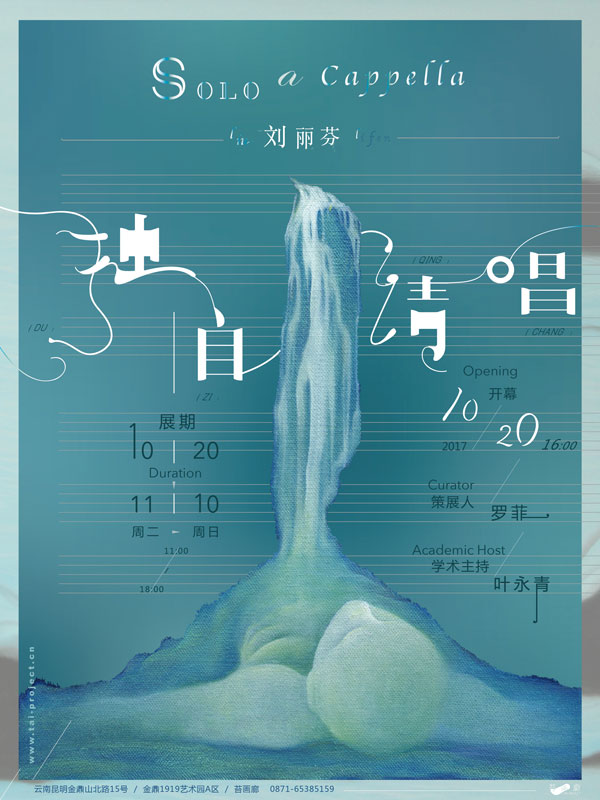 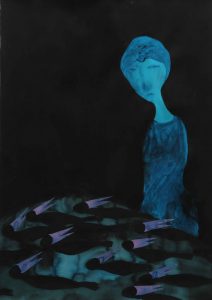 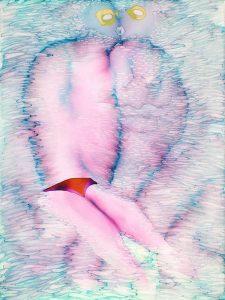 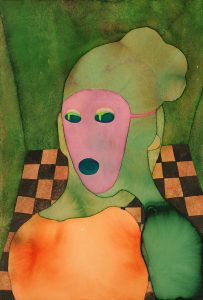 Liu Lifen is a talented young woman living in Kunming, Yunnan Province. I met her in 2000 at the Loft Artist Community, at a time when this small but culturally rich town in the Chinese hinterland was suddenly bursting with great creative energy. A flurry of activity from artist-run spaces and foreign cultural organizations brought hope to this culturally isolated town and its youth. A new generation was coming of age in this environment, and Little Liu (as I have always called her) emerged as a shining spirit among them. I have always seen her as a spokesperson for the aspiring artistic youth of the city.

Little Liu has distinctive looks, a unique personality and a somewhat rebellious fashion sense. She is also humble and kind to others. When we first met, she was still a student, working as a volunteer at a foreign-backed art organization, where she honed many skills. It was only much later that I saw her artworks. Her paintings have a signature feminine air. They are bright, fresh and elegant, imbued with musical texture and poetic flow, and radiating a soft touch of gloom. Her style is simple, warm and easy-going as it reveals the beauty of the Yunnan sun and its flowing water.

I understand her hometown is Lunan County, which has recently been renamed Shilin, after the Stone Forest. It is not a famous place, but it has left a deep impression on me for its karst terrain and its artistic legacy, as generations of early Yunnan artists painted the landscape in Guishan, an ethnic Sani village in the county. Among the scattered memories of a painter’s youth are so many fleeting yet lasting scenes, like the romantic recollections that spring so easily from all small, quiet towns, the contented moments that linger in the mind. This is perhaps the most frequent theme in Liu Lifen’s paintings 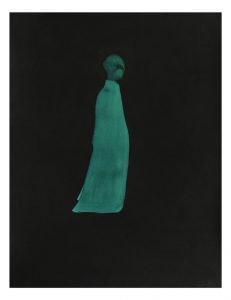 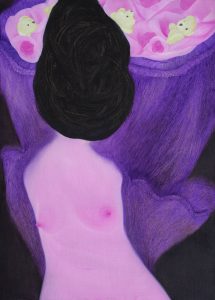 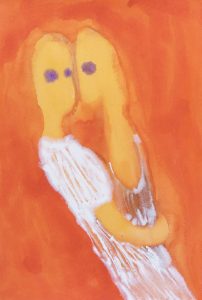 I follow her paintings back there, to the karst limestone and rolling red hills tinted a light purple, then deep blue, by the gold and red of the setting sun. The painter observes this process of change. Here there are emerald valleys, explosions of flowers and constellations of paths, bisected by a dark, meandering stream, poplar trees standing next to a hamlet, a crumbling stone wall surrounding a dark house, a shepherdess walking silently by with her flock. The days are slow and forgiving. In her works, Liu Lifen avoids the tourism, television, highways and ambitions that came later. It is as if it is still a long journey to reach that place, as if life has yet to change there, as if things have yet to be burned up by progress, convenient manufacturing and the bad habits of the outside world. There is no broken childhood here. Liu Lifen has rediscovered a typical childhood that brings us a laid back rhythm and outlook on time. The moments of being left behind by the world still linger, preciously and purely, in the artist’s works, with no ripping, tearing or crackling.

Kunming, where Liu Lifen is based, has a touching artistic and cultural history worthy of pride. The artistic trends that have swept through since the 1970s and 80s have encouraged many followers. The emergence of Liu Lifen’s generation coincided with some of the most dynamic years for the city’s art scene. The self-organization of numerous private, autonomous art spaces has infused this once remote frontier city with diverse, international contemporary art genes, breaking the isolation that had trapped the city since the 1990s. This is not the self-serving local history of a particular generation, as if the entire world had been fully explored in the 1980s and 90s. That is simply inaccurate. There is more to this world than just terrain, than just mountain streams and valleys, rivers and ponds, great lakes and highlands, cities and streets, more than just silent observation of time’s passage across the red soil and forests of stone, or the time that eventually takes us all, much less the vision and mindset that deifies one group and holds the rest back. The world also encompasses the voices of one generation after another of people pressing forward. This artistic miracle that plays out again each day is like a halo composed of different voices, shining through the cosmos. Many among us once called out our names within, but few of us knew to turn our shouts into song. The first time I truly saw Liu Lifen’s painting was in the corner of her gallery, Tai Project. A pure voice and spirit that can lead us to a garden at the height of emotion unfolded before my eyes. It was like she was confronting the entire world on her own, singing solo, a cappella, with no accompaniment whatsoever. Little Liu’s large watercolors on paper are refreshing, tranquil and resonant, like a lone voice, each note, each form, stroking the emotions of the viewer with an inspiring light. In Yunnan, Sweden, Australia, Iceland and Southeast Asia, Little Liu has taken part in many workshops and art events, employing diverse mediums and methods to create, perceive, express and share this joy, like the countless sprouts, rooted beneath the great trees of home, looking up to the boundless azure sky with dazzling leaves, yearning to grow. Like the prickle of dense grass growing across the land, the breath of freedom and sunlight permeating the soil, the bittersweet sound of birdsong in the heart. 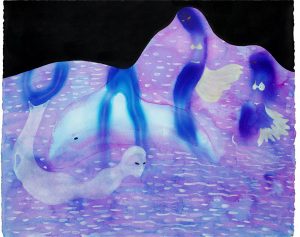 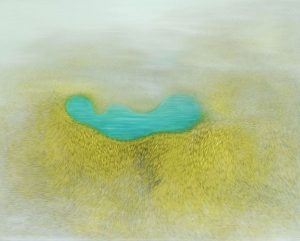 There is one kind of passion that has always had a hold over me—the kind of thought and action that marries the yearning for the outside world with the precious qualities of the people of a particular place. Self-exploration is a part of growing up, as well as a part of history. That year, on the occasion of a bustling art exhibition at the Loft in Kunming, it was with in a state of joyous surprise that I wrote the following expectations I had after seeing Liu Lifen and that generation of young artists for the first time: “Winter has not even begun, but now spring is upon us. What has happened to winter? Outdated things become discounted, and history disappears with great speed. The present has become a synonym for backwardness as we constantly set our sights on the future. The pace of life has cast the present day far behind us, and now, forgets you and me. We have become people living in tomorrow.” Since then, I have watched as many stepped off this dream-launching stage of the Loft and departed from Yunnan. This has become the norm. And among the dizzying shadows of a generation stepping out into the world, Little Liu has become the most dedicated and outstanding of them all.

The haplessness and conservatism of Kunming today leaves it once again a cultural wasteland in a state of regression. A once flourishing art scene has folded in on itself and ceased spreading its influence. After the cultural and economic tides receded, history and the present returned once again to a state of isolation in the cultural hinterland. Fortunately, we have Liu Lifen’s art space, which, in its carefree, natural and pure character, reveals to us the responsibilities of the artist and the joys of creation: the flowers of the everyday that emerge from the heart, and the yearning for the outside world, give rise to a receptive antenna in the interaction between the local everyday and the fluent internationalization, one which allows for the people of a place to maintain their connection to the world; rebellion against the narrowness of one’s surroundings leads to an outward-facing stance; deep love for a place leads to great sensitivity towards its decline; beneath the foam rising from the soil after the tide of art has retreated is a hardpan from which nothing can grow. History has placed the responsibility of bringing things forward onto the shoulders of gentle Little Liu. This is history’s joke, and the unavoidable pain of a generation of young culturally-oriented youth living on the frontier. 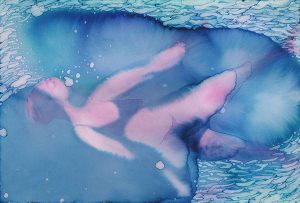 In recent years, every time I return to Kunming, I like to visit Little Liu’s gallery, Tai Project. This, the last of the city’s art spaces, is filled with artworks and flowers, and marked by the same allure and contradictions as her paintings, wavering between joy and solitude, light and heavy. This is the new gathering place and central base for Kunming’s culture. We sit on the stone steps in front of the garden, and starting in the afternoon, lovers of art begin to flow in from every corner of the city in a continuous stream that lasts into the evening.

The streetlights come on, and the routine-followers hurry home for dinner. The streets now quiet, the sounds of our clinking glasses and singing voices carry far, breaking the silence of the night and the tepid, unchanging atmosphere of the city.

Few youths can extol the life and art of this city with such delightful clarity. 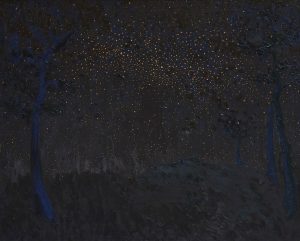 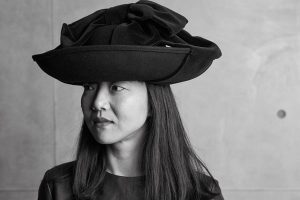 Lives and Works in Kunming, Yunnan

“Illegal, Temporary and Precarious States of Being – Migration”, Pridi Bhanomyong

“Above the Clouds”- travel art projects in Dali, Lijiang, XiAn and Beijing, China